Her Supreme Court nomination has been smooth sailing. 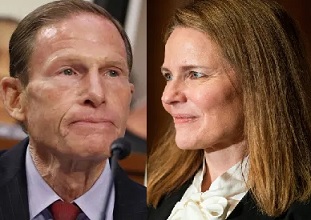 Washington DC, Oct.15.– The ratio of progressive outrage over the nomination of federal Judge Amy Coney Barrett to supposed reasons that the U.S. Senate shouldn’t confirm her is completely out of whack — there’s a surfeit of the former and almost none of the latter.

Barrett has received extraordinary testimonials from her colleagues and students, who say she is brilliant, conscientious, and kind. The opposition has countered with a dog’s breakfast of nonsense, including that her confirmation hearing can’t be held in the middle of a pandemic — when the Senate has continued its business since the pandemic began.

Upon her selection, media outlets ran a spate of stories about her reported membership in a Catholic group called People of Praise, linking the group to the dystopian novel The Handmaid’s Tale. What Barrett’s life and career have to do with the imagined misogynistic world of the novel was never clear — she’s a mother of seven who has ascended to the very top of her profession with the help of a supportive husband.

Barrett’s social conservatism has been another line of attack. Her critics have fastened on the fact that she signed a statement in 2006 declaring her opposition to abortion. It’s not news that Barrett is pro-life, nor should it be disqualifying unless progressives believe that anyone with a view counter to theirs on a hotly contested moral issue should be, on principle, excluded from the highest court.

It is not true, as has been widely reported, that Barrett said in that same statement that Roe v. Wade should be overturned ...

back to top
THE MOST IMPORTANT THING ABOUT EDUCATION IS APPETITE.
Winston Churchill

We have 820 guests and no members online