Federal authorities described them as a militia planning & rehearsing for several months on how to start a civil war.

There’s no indication in the criminal complaint that the men were inspired by Mr. Trump. 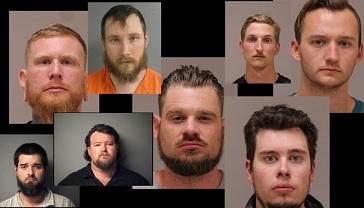 Whitmer, authorities said Thursday in announcing charges in an alleged scheme that involved months of planning and even rehearsals to snatch her from her vacation home.

Six men were charged in federal court with conspiring to kidnap the governor in reaction to what they viewed as her “uncontrolled power,” according to a federal complaint. Separately, seven others were charged in state court under Michigan’s anti-terrorism laws for allegedly targeting police and seeking a “civil war.”

A few hours later, Ms. Whitmer pinned some blame on President Donald Trump, saying that he did not condemn white supremacists in last week’s debate with Joe Biden and instead told a far-right group to “stand back and stand by.”

“Hate groups heard the President’s words not as a rebuke but as a rallying cry, as a call to action,” Ms. Whitmer said. “When our leaders speak, their words matter. They carry weight.”

The six men charged in federal court plotted for months, consulting and training with members of a group that federal authorities described as a militia, and undertaking rehearsals in August and September, according to an FBI affidavit. They were arrested Wednesday night and face up to life in prison if convicted.
(...)