People are growing ever more desperate in the areas under his control. 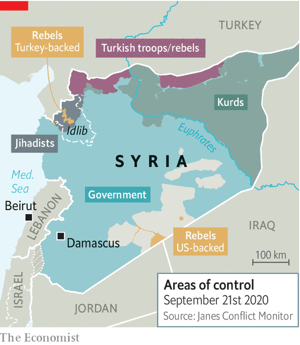 Damascus, Sept. 26.– The price of food in Syria has risen so high that women boil weeds to eat. At bakeries in Damascus, the capital, men clamber over each other to get their hands on what little subsidised bread is available. Across the country, queues for petrol snake for miles. Large parts of some cities are rubble. The currency is worth so little that locals use it as cigarette paper.

This was meant to have been a year of recovery for Bashar al-Assad. After nearly a decade of civil war, Syria’s dictator has all but defeated the rebels who tried to unseat him. He hoped one last push would seal his victory and that foreign powers, seeing no alternative, would re-establish diplomatic ties and begin to pay for reconstruction.

So far, it has not worked out like that. Rebels, backed by Turkey, repelled Mr Assad’s spring offensive on their last big stronghold in Idlib province (see map). Despite President Donald Trump’s promise to withdraw, American troops remain in Syria’s oil-rich north-east, helping the Kurds consolidate their rule over the territory. American sanctions have hurt the Syrian economy; a financial crisis in neighbouring Lebanon adds to the pain. Then there is covid-19, which is hitting Syria hard. Humanitarian conditions in regime-held territory are worse now than at the height of the war, says the un.
(...)