Vatican City, Feb.12.– Pope Francis' post-synodal exhortation on the Amazon is part of the Church's ordinary magisterium — that is officially a kind of Church teaching — 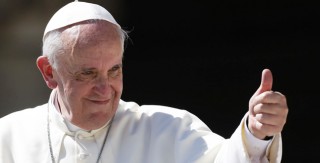 Pope Franciswhile the final document of the Vatican’s 2019 Amazon synod is not, Cardinal Michael Czerny, special secretary of the Amazon synod, said Feb. 12.

The distinction in the authoritative weight of the two documents was also emphasized by Cardinal Lorenzo Baldisseri, secretary general of the Synod of Bishops, and by Matteo Bruni, the director of the Holy See Press Office.

“So we have two documents of two different kinds,” Cardinal Czerny said in a presentation to journalists.

Pope Francis released Feb. 12 the apostolic letter, "Querida Amazonia," which presents his response to the discussion of the Amazon synod, which took place in Rome over three weeks in October 2019.

“The final document, consisting of proposals made and voted by the Synod Fathers, has the weight of a synodal final document,” he said, whereas the apostolic exhortation, “reflecting on the whole process and its final document, has the authority of ordinary magisterium of the Successor of Peter.”

Pope Francis released Feb. 12 the apostolic letter Querida Amazonia, which presents his response to the discussion of the Amazon synod, which took place in Rome over three weeks in October.

This synod ended with the presentation to Pope Francis of a final document, which was voted on by synod members, setting out a series of recommendations based on the issues discussed during the preparation phase and synodal sessions.

The final document of the synod assembly is what Cardinals Czerny and Baldisseri said does not have the weight of ordinary magisterium, noting the pope’s “presentation” of the document.

Pope Francis “encourages everyone to read the whole document” Cardinal Czerny stated, but added that suggestions made in the synod’s final document remain in discussion only “as proposals made by the synod.” This means that Catholics are not required to believe, or even agree with, the proposals, or regard them as teachings of the pope.

In Querida Amazonia itself, Pope Francis offers his own reflections on the Amazon, saying he “will not go into all of the issues treated at length in the [synod’s] final document. Nor do I claim to replace that text or to duplicate it.”

The pope states that, at the same time, he “would like to officially present the Final Document, which sets forth the conclusions of the Synod...”

Francis added: “I have preferred not to cite the Final Document in this Exhortation, because I would encourage everyone to read it in full.”

The pope also asks that “pastors, consecrated men and women and lay faithful of the Amazon region strive to apply” the work of the synodal assembly.

Francis’ use of the words “officially present,” prompted some to ask if the pope wishes to give added weight to the synod’s conclusions, even if he chose not to cite them directly in his own document.

The option for the pope to adopt the final synodal document as his own, including it as official Church teaching, was part of changes the pontiff made to synod rules in 2018. Since that year, canon law has permitted the pope to give a specific and deliberate kind of approval to a final synodal document that would incorporate the text into the pope’s ordinary magisterium, or official teaching.

However, Cardinal Baldisseri said that article 18 of Episcopalis Communio, which established that law, makes clear that the pope needs to give his approval “expressly.”

The final document of the Amazon synod “has a certain moral authority, sure,” he added, “but not magisterial.”

Synods of bishops convened by the pope serve a mainly consultative role, as indicated in the Code of Canon Law.

Their main purpose is to foster unity between the pope and the bishops around the world, and to offer their input as the pope considers questions pertaining to the Church’s activity in different parts of the world, on issues of faith and morals, and “in the observance and strengthening of ecclesiastical discipline.”

“It is,” the Code says, “for the synod of bishops to discuss the questions for consideration and express its wishes but not to resolve them or issue decrees about them unless in certain cases the Roman Pontiff has endowed it with deliberative power, in which case he ratifies the decisions of the synod.”

Cardinal Czerny said he thinks the best way to understand the synod’s debate of the possibility of the ordination of married priests in the Amazon region is to see it “as part of a process and as part of a journey.”

“That’s why it’s called a synod,” he noted, adding that “we are at a very important part in this synodal process and there are long roads ahead as well as long roads already traveled.”

“And so the questions you are returning to are questions ‘on the road,' and the Holy Father has not resolved them in any way beyond what he has said in the exhortation,” the cardinal underlined.

“So if there are questions you feel are open, or that the Church feels are open, thanks to the exhortation they will continue to be discussed, debated, discerned, prayed over, and when mature, presented to the appropriate authority for decision,” he said. “There are decisions that can be made in a diocese, in a [bishops’] conference, and there are decisions that are made here [in the Vatican].”