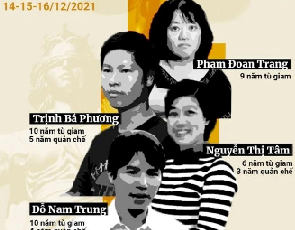 Trang, were sentenced to up to a decade in jail, and five years on probation.

Spokesperson Ravina Shamdasani said OHCHR was “deeply troubled” by the harsh sentencing of the human rights and land rights defenders, who were charged under articles 88 and 117 of Viet Nam's Criminal Code.

Meanwhile, journalist Le Trong Hung, who had announced his intention to run for political office as an independent, is facing trial on 31 December on similar charges.

“We urge the authorities in Viet Nam to immediately release all these individuals as well as the many others arbitrarily detained for exercising their rights to freedom of opinion and expression,” said Ms. Shamdasani, speaking in Geneva.
(...)

We have 600 guests and no members online