Balancing property owners' rights with the need to provide homes for our growing population. 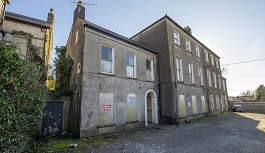 Property dereliction is another manifestation of the latitude afforded to property owners in Ireland.

Dublin, Aug. 2.– Even the most indifferent, daydreaming student of our history will, even if by osmosis, understand that it is largely a story of those who own property and those who do not. That is the case in most societies, but it seems an especially sharp and enduring conflict in this country. Whole swathes of our history are focused on mitigating the disproportionate impact property ownership — landlordism, in the vernacular of our revolutions — had on the fate of those of no property.

As in all post-colonial societies, there was an assumption that we would use independence to better balance the ambitions and rights of property owners and others. That being a tenant rather than a mortgage-holding home-owner — eventually — is still almost regarded as a kind of expensive failure shows how uncomfortable much of this society remains with being dependent on a landlord. That institutional investors have taken such a grip in the home market will do little to allay those concerns.

There are many long-standing reasons for this but one has been highlighted by Cian O’Callaghan, the Social Democrat TD for Dublin Bay North. He and others have strongly criticised the Government for not making a deposit protection scheme effective almost six years after it became law.

The Residential Tenancies Board was to hold tenants’ deposits so, in the event of a dispute, the tenant’s interests might be on an equal footing with their landlords. The scheme was designed to avert disputes involving the retention of deposits, which, in turn, can cause homelessness. Vulnerability is exacerbated while property is afforded the protection that makes renting such an unattractive proposition.
(...)

We have 722 guests and no members online